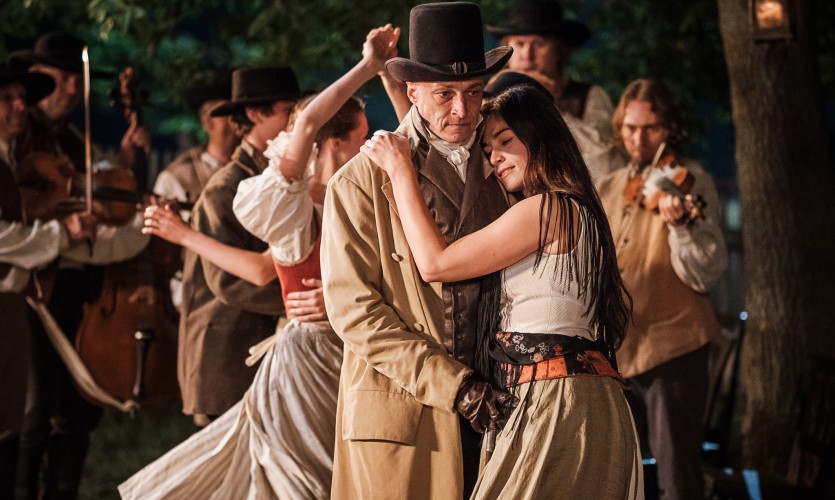 At the beginning of the 19th century, a strange nobleman (played with charismatic aplomb by Karel Dobrý) returns after years abroad to a small Bohemian village. Paganism and Christianity have both staked a foothold there, but neither much interest the Baron. Preoccupied with restoring, and lodging curiously close to, the ponds on the family estate, he does come to have one interest in common with his subjects: he’s transfixed by the beauty of the free-spirited Katynka (Simona Zmrzlá). However, notwithstanding his higher station, would she not spurn him were she to discover his alarming true nature – if nature even be the right word?

Renowned jazz singer and actor Ondřej Havelka has made a wonderful debut film – one of the most invigorating fractured fairy tales in many a long year – in this handsome adaptation of the celebrated novel of the same name by Miloš Urban.

Pérák was an urban legend throughout Czechoslovakia in the midst of German occupation in WWII. Stories of the Spring-man from Prague, who terrorised Nazis whilst giving Czechoslovakians hope, were regularly told. In The Spring-man and the SS celebrated Czech animators Jiří Trnka and Jiří Brdečka tell the tale of one of Pérák’s many adventures thwarting the Nazi regime.

The Spring-man and the SS will screen courtesy of the National Film Archive in Prague.

Opening Night: ticket includes a drink upon arrival at the cinema and access to post-film party in the ACMI Café and Bar, with a free first drink, nibbles, and live music from Vardos! Doors will open at 6:30pm.